Flamencolele, the album that started it all! Listen to sample tracks here, or the full album on Spotify or Apple Music. Check out our song notes below! 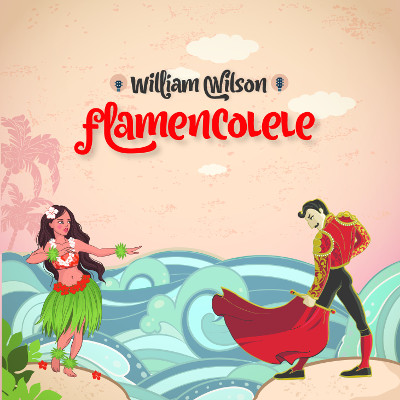 Listen to the full album on Spotify or Apple Music

“Maui-Gueña” is a playful rendition of the famous Spanish “Malagueña.” Years ago I heard jazz saxaphonist Sonny Rollins in concert. At one point he started his signature piece “St. Thomas.” The crowd went crazy! And 10 seconds later he changed tunes. It was a very funny moment. (Link to Sonny playing St. Thomas…the whole thing) I thought I would do something similar with “Malagueña” just teasing the melody and then off to something else. Though in mine the melody comes back a couple of time. A very fun tune! Musicians, see if you can figure what meter it is in?

The title was chosen by David Jones. Here’s David on the title:

“I remember back to the start of your project. The theme, as I recall, was to bring the ukulele and classical guitar together in the spirit of Hawaii. One of my favorite Flamenco pieces is the traditional Malaguena. It didn’t take me long to come up with Maui-guena – a fun take-off of the title that brought the island feel of the ukulele to the passion of the Flamenco.”

“Bajo el Ombú” is actually more South American than Spanish. It started out as a fun little Milonga on the Ukulele, and I added a legato melody on top. Years ago I recorded an album of Piazolla, and this one shows his influence.

The name comes from my aunt Ana and cousin Jon Paul. Here is Jon Paul on the name:

“Hola Bill, Ana and I just sat listening to the piece a couple of times. She came up with “Bajo el ombú.” Ombú is a tree, characteristic of the pampa (More on El Ombú). It made her think of being surrounded by the Argentinian nature, cows, etc.”

Kula Mele is based on a traditional Flamenco form known as the Alegrías. (Video of the Alegrias being danced) Listen for the tapping on the Ukulele. The name means “Meadow Song” and was chosen by Steve and Lauren Tabor:

“Our song (mele) brings to mind Hawaii Island’s Parker Ranch paniolos riding through the grassy pastures speckled with cinder cones and koa trees in the shadows of the Kohala volcano.”

Maria is a combination of a Hawaiian Slack Key Piece ( More on Slack Key )  and a Flamenco Rodeña ( More on Rodeña ) It uses a special tuning of the guitar (D A D F# B E) which leads to some interesting harmonies. It was commissioned by tenor Ernie Grimm for his wife Mary.

“I chose the name Maria after my wife Mary had asked for a song named after me, but in Spanish — Ernesto.  I was delighted with the song William composed. I thought there can’t be an Ernesto without a Maria. And if anybody deserves to have a song written for her, it’s my Mary, who has brought 11 children into this world and raised them to be warm, loving, and virtuous — all while enduring a steady stream of nonsense from her Ernesto. Thank you, William, for writing and recording such a sweet, poignant song in honor of mi Maria.”

Cocinar Con Amor  is a Nuevo Flamenco style piece. It starts with rhythmic tapping on the body of the guitar and then enters into a lively rhumba rhythm. The title was chosen by Amiko Gubbins.

“this song reminds me of cooking dinner at Sunset.. the beginning sounds like chopping.. then prepping and making a seven course meal… ”

Though she’ll kill me if she reads this, Amiko is a rock star chef ( and one of my most enthusiastic students) You can read about here here: SD Magazine on Amiko Gubbins

“Corazón de Patricia” started out as a Siguiriyas ( Video of Siguiriyas – fast forward to 2 minutes in where it really gets going!) and grew to incorporate other elements, even the traditional Bolero rhythm. It was named by Mark Gomez.

“The heart of my wife, Patricia, encompasses me, our family and all those around her. She has been blessed with this gift of a loving heart and it is one I have treasured over the 37 years I have been married to her. I believe that music is the language of the soul and reveals things that words cannot. William’s composition has captured the way my wife’s heart embraces those around her.

Through His Sacred Heart,

the lovebirds sing together;

their hearts become one.”

“OK so I wanted to name the song after Mickey as you know:) He has ‘dots’ that make him Mickey mouse. So I was thinking “Dots of Joy” because he adds so much joy and lives such a joyful life. In spanish it is ‘Puntos de Alegria’.”

If you enjoy this track check out Los Indios playing “The Ritual Fire Dance.”

“Ku’u Ipo I Ka He’e Pu’e One” is a traditional song written by Princess Likelike (More on Princess Likelike). The title means “My sweetheart in the rippling hills of sand.” The lyrics speak of a heartbroken girl who could not marry her sweetheart. This version is performed on Spanish guitar in a melancholy mood. There are two solos on the Flamencolele ablum, this piece a traditional Hawaiian song played on Spanish guitar, and “A Un Niño Ciegocito” a Spanish traditional played on Hawaiian Ukulele. A real Flamencolele mixup!

If you are a guitar / ukulele player yourself check out this video on how to play a golpe.

“Ramblin’ Gal” draws from the swing heritage of the Ukulele. Listen for the swinging eighth notes and the jazz style solo. The name was chosen by Stephanie Giuffre.

“The name ‘Ramblin’ Gal’ embodies not just the feel of the song, but how I live my life. I am a full time traveler with a permanent camp in a place called Slab City, where people live their lives how they want to live them. Keeping that as a home base allows for the time and freedom to go on trips ‘ramblin’ about the country. As a dancer, when I think of choreography for the piece, I envision a woman ‘strolling’ along a path, meeting all sorts of wonderful people on her journeys, in various settings from towns and villages to the countryside to marketplaces and festival sites.”

Here’s a super funny Ukulele Swing I just had to link to!

“Why did I name my song ‘A Beautiful Life’ in Spanish. In Spanish because my beautiful mom is from Buenos Aires, Argentina. The rest of the reason can be simply stated..’ I woke up having another day of wondering why “bad” or challenging things happen to good and gracious people such as my mom. I listened to my song to name from Billy and immediately was reminded and felt through song the beauty of life. The rhythm and sounds of the song reminded me of the beauty of life experienced by the dark times followed by being blessed by light and hope. The music sounds like hope following life’s challenges. This gives me strength.'”

“The Poet’s Joy.” is a strict canon. This means that it’s actually only one melody played by two instruments, but one imitating the other, similar to a round (think “Row, row, row your boat.”) It also uses a Spanish Habanera rhythm for a crazy combination of Spanish, Hawaiian, and Classical elements. The name was chosen by Deirdre Lickona in honor of her husband poet/writer Matthew Lickona.

One of my favorite composers of Canons was Telemann. I recorded several of them on a recent album, Classical Guitar Music for Reading and Studying.

“Ernesto” is based on a flamenco “Guajiras” a lively fun dance in a major key. (Video of Guajiras being danced) It was commissioned by Mary Grimm for her husband tenor Ernie Grimm.

“‘Ernesto’ is named for my passionate, operatic tenor husband, who is a gift to those who know him, with his humor and empathy and also his majestic singing voice that gifts those who have the pleasure to hear him sing. Long live Ernesto!

In the composition I tried to capture both aspects of Ernie’s personality, the humorous and the musical. The first part of the song is fun and bouncy, but this moves into a more serious minor section with long notes in the melody. The piece concludes with a return to the fun major section and ends with a famous musical quote. Can you name the tune? (Hint listen to the last 10 seconds or so)

One of my favorite (and the most difficult) techniques for the guitar is the tremolo. In the tremolo a guitarist is required to play a single note quickly over and over with his fingers while playing and alternate melody with his thumb. It sounds something like a waterfall or river flowing (very appropriate for a Hawaiian themed album!) Every time I play a tremolo for my wife soprano Mary Ann Carr, she calls it “Little Fishes.” So I when I wrote this piece for her I thought it would be the perfect title, Little fishes or “Wahi I’a” in Hawaiian.

This track features a seven string guitar (listen for some cool low notes, way down to a low “A”!) made by Len Laviolette and commissioned by wife Mary Ann.

“Melodía de la Attamma” is loosely based on a Tanguillos de Cadíz. A fascinating style that combines three different rhythmic meters at the same time! 6-8, 3-4, and 2-4. Watch this version for a good feel for the style: Tradional Tangos de Cadiz.

The title was chosen by K Karunaratne and means “Melody of the Grandmother,” in a combination of Spanish and Sri Lankan.

“Sunset Over Mackinaw” was the first song I wrote in the Flamnecolele style. It started out as a Soleares (Check out this video if you ever want to learn to dance Flamenco. Soleares is considered the mother of Flamenco and is a great place to start!) I then slowed it down, and mellowed it out, a little “island style” you might say. The opening melody on the guitar is the traditional “Soleares” Melody.

The title was chosen by Michael McDowell, who used to visit Mackinaw Island, Michigan, back from 1938-1941.

“A Un Niño Ciegocito” is a traditional Spanish folk song. I thought it would be fun to do a Spanish Song for solo Uke, as well as a Hawaiian Song for solo Spanish guitar (Ku’u Ipo I Ka He’e Pu’e One). The title means “To a Little Blind Boy.” Check out the original version sung here.

“Aloha Oe” is the best known Hawaiian song of all time. Written by Queen Liliuokalani it has been recorded countless times. But never in the Flamencolele style! This version adds Flamenco harmonies and Rhumba strumming. Here’s a cool video on how to strum Rhumba on guitar, which works equally well on Uke!

Listen to the Full Album at: